The Hidden Ties Between our Forests and Water

One of the most important aspects of how water is managed in a healthy functioning forest is how it collects precipitation. Most people think of precipitation as a linear occurrence, where water falls from the sky as rain and moves downward through the basin until it reaches the ocean. However, water in forests moves in mysterious ways. One such way that we can observe is horizontal precipitation, the process in which fog gathers in the canopy of foliage, moss, and lichen and condenses into liquid water that drips to the ground. It stands to reason that tall, mature stands of trees can collect water from condensed fog much better than their smaller mono-crop plantation cousins. In fact, there’s been various studies over the years; one of which shows that as much as 30% of total precipitation within a forest can be gathered via fog drip precipitation. This input of water is especially critical for the Coast Range in the warmer months of the year, when there is very little rainfall but a consistent blanket of morning coastal fog.

A fascinating tangent lies in how forests deal with fog-drip precipitation. Some of the condensed fog will never drip to the ground, but will heat and evaporate back into the sky.  However, much of the liquid water will instead be sucked into the foliage through a process called foliar uptake where it will take refuge within the leaves and needles through their stomata until the tree needs to transpire (cool itself as a human body may perspire). A forest of trees that can gather moisture in the air in order to transpire lessens the need for the forest to collect groundwater through its network of roots in order to achieve the same affect, and thus, increases the groundwater available. The sum total of this process is yet to be determined, but data from different points of research could help shed it some light.

New scientific research is helping us understand how water moves through healthy forests vs. tree plantations. The 2016 Jones/Perry study out of the HJ Andrews Experimental Forest in the Cascades showed that mature forests have 50% more summertime water flow than nearby reprod tree farms.  There’s a few reasons the Jones/Perry study cites as to why more water is available in mature forests, but mainly it has to do with the efficiencies inherent within mature forests. To distill it into a single thought, they are just better at managing water.
The implications of this study are significant. For decades the timber industry has pushed the idea that mature forests use up more water because of all the big trees. This study and others like it are putting that slanted viewpoint to rest. However, the Coast Range lacks such science, and without it government agencies and legislators alike can claim that studies done within watersheds of different mountain ranges cannot be applied to the Coast Range watersheds (unless of course that science supports the logging of forests).  Fortunately, in the southern Coast Range there is an apparent case study waiting to happen between two adjacent, but vastly different watersheds.

It seems the first step lies in merely attaining a stream gauge.  Stream gauges give us real time data on water flow throughout the year.  The Elk River, located in Southern Oregon, had a stream gauge placed just this past year – but its adjacent watershed to the north, the Sixes River, did not.

The Elk River watershed is unique in Oregon. Thanks to Jim Rogers and the Friends of the Elk, two designated wilderness areas, Copper Salmon and Grassy Knob, cover much of the Elk’s basal area and a portion of the Sixes River watershed directly to the north. These designations have given the Elk unprecedented protections for a Coast Range-born river. And because of these protections, the Elk River offers us a rare opportunity to study how mature forests treat water. 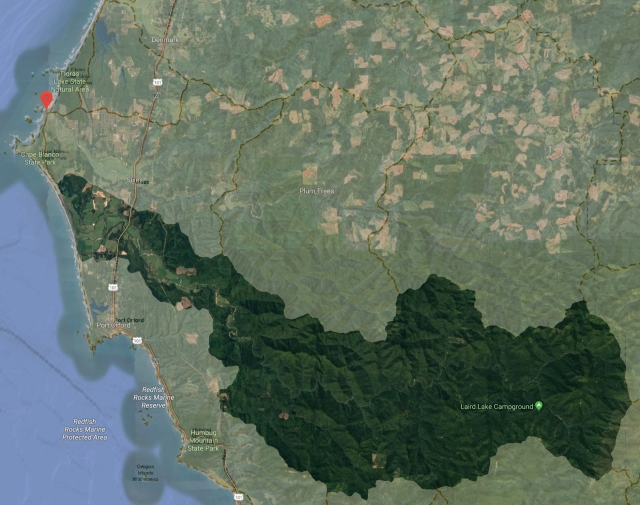 So what’s up with the Sixes River?

While the Sixes River basal area is around 30% larger than that of the Elk River, both rivers share a border, begin at a similar longitude within the Coast Range, collect a similar amount of rainfall, and empty into the Pacific within a few miles of each other. The southern border of the Sixes watershed and northern border of the Elk watershed share a ridge, as well as geologic similarities.  Jim Rogers, who lives along the Elk River, once described the terrain of the two rivers on that shared ridge as “steeper than a cows face.” But the main difference between the two watersheds is that the Sixes is heavily logged towards its northeastern edge, while the Elk has far less forestry activity. 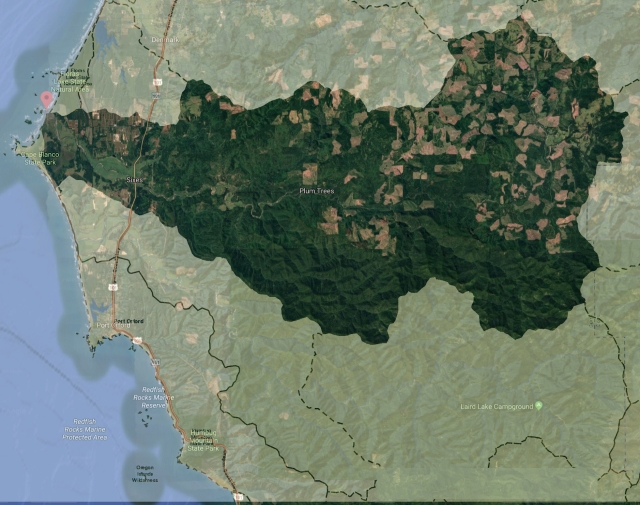 This difference provides the cornerstone to understanding how each watershed deals with water. And how each watershed deals with water has profound implications on fish numbers, water quality/quantity, and fire potential. In fact, a Department of Environmental Quality study done in 2011 showed that the water temperatures in the summer months were substantially higher in the Sixes than in the Elk, by as much as 3.5 degrees Fahrenheit during the month of August, which is a significant temperature variation for fish and aquatic organisms. Why is this so?  For one, the Sixes River is afforded fewer areas of protection, resulting in extensive logging on private industrial timber land.  And because of the inadequate regulations towards riparian zones in Oregon combined with fewer mature forests depositing cool water into streams, water temperatures rise in rivers like the Sixes, especially when the water flow tapers off in the summer. While the Sixes River basin is larger than that of the Elk’s (roughly 134 square miles vs. 92 square miles), the Elk River shows signs of having superior fish habitat throughout the year and much cooler temperatures in the summer.  This causes us to wonder — even if the Elk River has less overall water than the Sixes, does it retain a much greater proportion of water flow during the hottest time of the year? 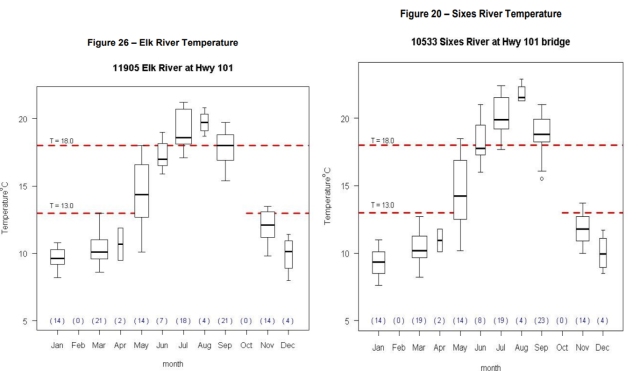 Water Temperature Comparison Between the Elk and Sixes Rivers

We can surmise that the Elk has more summertime water flow because of its protections and how mature forests are much better at collecting and managing water than tree farms, but educated guesses won’t move the needle of meaningful legislation. We need a data set that contrasts the Elk, and the Sixes River is as good of a source available to provide that data, even if it’s not a perfect case study.  One thing is certain, the 2016 Jones/Perry study provides insight into a critical function of western Oregon forests; that we are losing dramatic levels in our water tables due to clear-cut logging and mono-culture plantations.  A stream gauge on the Sixes River will help expand our understanding of how forests and tree farms deal with water in the Coast Range.

If you are interested in the possibility of the project, please say tuned!  We are looking into the process of how to get a stream gauge place in the Sixes River, and may need the help of our supporters.

This entry was posted in Uncategorized. Bookmark the permalink.